One of the ‘Magnificent Seven’ historic cemeteries around London, Highgate Cemetery was described as the best example of Victorian architecture.

I have had a fascination with stone angles and other tomb sculptures for years so a visit to Highgate was on the top of my list.    I was not disappointed.

Highgate is divided into East and West sections.     Visiting the east side required a reservation and a ticket that I booked weeks in advance for Halloween, an appropriate day.

How strange that you must have a reservation and pay to visit the sleeping.

Promptly at 2 PM the small group was allowed to enter the chapel in the two story stone building at the entrance.   We were introduced to Peter and started our adventure.  For the next hour we were entertained, informed and gained a little insight into Victorian burial practices.   Dating back to 1839 there was much to learn.  A wonderful book available in the ticket office, “Highgate.  Saved by its Friends” was a good source of details on the history of the cemetery, the more famous people buried here and the distinctive architectural styles found. 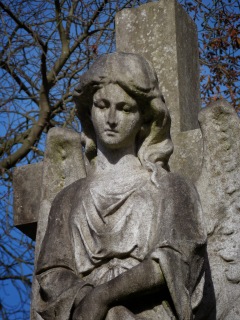 My goal was to photograph the monuments throughout the cemetery, particularly the angles.   But there were many other buildings and decorative carvings that were equally as interesting.   Highgate is a rolling terrain of natural growth of trees and plants that surround the monuments and border the trails.  This is not the trimmed grass and standardize monument cemetery we find in many American locations.   At first glance you think the many acres are not tended.  Peter explained that invasive plants and trees are being replaced with other plants that will not damage the monuments.

This is a very peaceful place.  Although only families of the interred and paid tours are permitted to visit, there is no sense of sorrow or dread.   The most noteworthy avenues lead you to the Joshua Tree which is believed to be 100+ years old.  The impressive Egyptian Avenue leady to the Circle of Lebanon.  You could easily spend all day in this beautiful ‘forest’, strolling and reading the inscriptions on the monuments.

Peter (our guide) pointed out some of the symbolism that the carvings depicted: 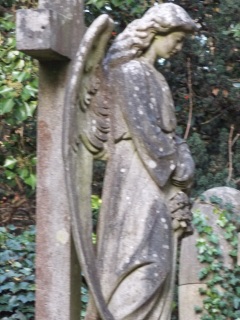 To describe each monument and give the history of the more famous ‘residents’ would become another book on this one of a kind locations.